Advanced Bullet Detection that can literally see in the dark.

See in the Dark

The original chronographs, dating back to early 1900’s, functioned by having the bullet cut a piece of wire at the muzzle to start the timing, and striking a down range plate to stop it,  the actual measurement being done by measuring how far a weight fell during the time of flight. Later, two wire screens were shot through, each causing a mark to be made on a spinning disk, the distance between the marks converted into the bullet speed. During WW2, the US Army Ordinance Department developed the first optically triggered counter chronograph (based off of a Geiger counter) using photo-cells and sky light as the source of illumination, they started calling them “Skyscreens.”

The design of the Skyscreen has a huge effect on both the accuracy of the chronograph, and the reliability of function. We want to give the shooter as large a window as possible to shoot through, while blocking direct sunlight from striking the sensor. The white piece at top of the triangle defuses the light and acts like an overcast – providing a consistent bright high contrast background to spot the bullet against.

Our Mk7 Skyscreens contain spring loaded detents which precisely locate them 18” apart when slid on to the custom mounting bar. This can be set on a bench or mounted on any standard camera tripod. Internal optics enhance the sensitivity of the detectors as well as increasing accuracy.

For indoor use, or a more permanent range set up, our Mk7 IR Skyscreens are the way to go. Rather then using the ambient sun light for illumination, each Skyscreen contains an IR illuminator which is focused into a fan shaped beam and projected up against a retro-reflector affixed to the underside of the white diffuser screen. This provides absolutely consistent illumination and extremely reliable triggering. 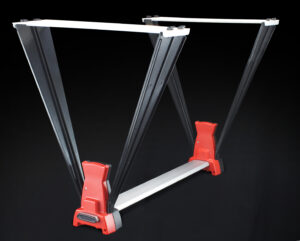 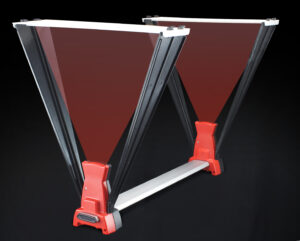 With our Infrared Skyscreen Sytem paired with our Chronograph’s, you can literally see bullets in the dark.
ADD
$49.95 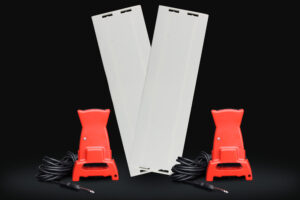